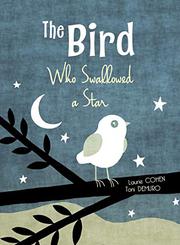 When the titular bird swallows a star, he becomes “brighter than a diamond” and “glow[s] like a thousand fires.” After he is ostracized in turn by all the “chicks,” stags, toads (frogs, in the illustration), mice, hedgehogs, and fish—either because they’re “envious” of the light (according to the text) or afraid of predators (according to what they say), the bird ends up in the desert, weeping. A flower apparently sprouts from one of his tears. Along comes a human passerby in generic Middle Eastern dress who sets the bird on his shoulder, proclaiming that it has a fabulous talent! “In the desert, in the distance, one might think that a man had a star upon his back.” Here the text cuts off, but the pictures continue for six pages in which the travelers reach a walled city of pointed golden domes and the bird flies off, singing to a thin crescent moon. The man’s bare ankles are brown, but the skin on his face is milky, with dot eyes and a flat, orange nose that give his features a puppetlike look. Overall, the illustrations, composed of large, flat, moonlit forms that resemble cut paper, have a properly serene and mysterious air. The glow is all on the surface, though; what sort of enlightening insight or emotional response readers will dig out of this import is anybody’s guess. Perhaps it makes more sense in the original language.