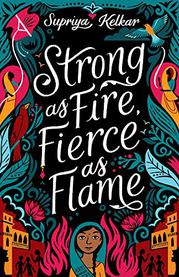 As per tradition, Meera and Krishna were married when she was just 4. When she turns 13 in a few days, Meera will be considered ready to be a wife. But on the day she’s supposed to move in with her husband’s family, disaster strikes: Krishna is killed. According to their families’ customs, Meera must commit sati, burning herself to death on Krishna’s funeral pyre. Luckily, her aunt helps her escape, and Meera flees to the city of Indranagar, where she ends up working in the kitchen of a high-ranking British family. Meera’s plan is to keep her head down and save enough to make a fresh start, but things change when her new friend Bhavani invites her to join a group of underground revolutionaries working toward India’s freedom. Meera must decide whether to fight for her country, her future, or both. The final third of this historical novel is laced with twists, turns, and reveals that are both surprising and riveting. Meera’s transformation from scared child to bold revolutionary is especially gratifying. Informed readers may notice clues to some characters’ castes, but the subject of caste is not directly addressed even though the British at this time were using the caste system to turn Indians against each other.