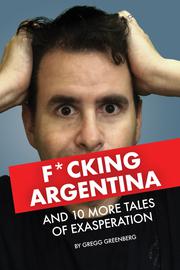 Greenberg’s set of 11 tales starts with a dictionary definition of “exasperation,” and that “feeling of intense irritation or annoyance” radiates from each of these quick narratives. In the tradition of essayists such as David Sedaris and TV shows like HBO’s Curb Your Enthusiasm, Greenberg tells stories of highly neurotic antiheroes and their outsized responses to life’s little problems. In the opener, Mitchell Weinberger, a divorced father, suffers through small talk with overbearing parents at his child’s back-to-school gathering. In “Panic in Shubert Alley,” a nameless man runs around New York City’s Times Square theater district looking for his forgetful mother’s purse, and in “A Side of Exasperation on the NJ Turnpike,” a desperate dad finds himself trapped in a drive-thru while trying to order hamburgers. Greenberg consistently keeps to his theme, but in some works, he stretches into particularly imaginative displays of irritability, as when he constructs  an entire story out of text messages between a husband and wife, or personifies the entire nation of Argentina as a deadbeat friend. The author effectively marshals a wide array of annoyances, but a standout appears in “The Last Couples Dinner,” in which a woman faces off against an “X+1”—a man who feels compelled to one-up everything anyone else says. There are several mentions of the Covid-19 crisis over the course of the book, which cleverly link the tales to the collective exhaustion of the past year. Despite the stories’ extremely short lengths, Greenberg occasionally manages to kindle slow burns of awkward irritation, as in his reveal of a subway stench in “Malodor on the Number Five Express.” However, several jokes don’t quite connect, including a Billy Joel–based breakup that turns into a list of lyrics, and as the title implies, the author often relies too much on expletives to get laughs.