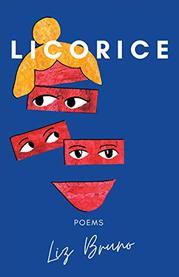 In her collection, Bruno brings together more than 50 poems, some previously published in literary magazines. The opening piece, “In Montana, I Learned To Not Horse Around,” sets the stage for the volume’s overall engagement with expectations for femininity and the reality of possible self-expression. “In my state, the cowgirls were queens. / Crowns rode their heads and jewels rode their fingers,” the poem begins. But this seeming power is a gimcrack pose; in fact, women must obey the rules of chastity, cleanliness, and obedience set for them. In the end, “We climbed into bed. We closed our eyes and hopes politely.” The last line’s zeugma enacts the hidden catch that was there all along, and this subtlety among what are apparently plainspoken sentiments characterizes the collection. It can also be seen in, for example, many poems’ use of rhyme, as in “Platonic Form of a Hot Mess.” Here, lines ending in words like light, bright, right, night, or polite are scattered among nonrhyming ones, as if the poem is, like the speaker, still blinking uncertainly in the sun after living in shadow. The collection follows the speaker’s growing understanding of the traps of femininity and marriage, uncovering wrenching or haunting realities. Motherhood, though, discloses new strengths. In “Getting a Grip,” a new mother is weary, but she’s akin to strongly rooted trees: “They have stretch marks / and still, here they are standing tall and breathing.” The craft of poetry, too, offers a power beyond the limitations of cultural expectations, as in the optimistic final piece, “Second Tongue”: “It is good, the sun kept saying / until the poem put on her sunglasses / and went to work.”