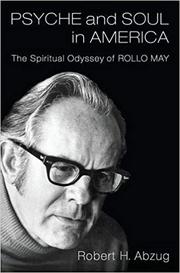 Rollo May (1909-1994) once defined therapy as “the search for one’s own myth.” Biography, then, might be read as the search for someone else’s myth. Abzug, a history professor and chair of the Jewish Studies program at the University of Texas, takes this approach, and the May that emerges from the search is one who swings wildly among grandiosity, self-doubt, profound insight, personal fumbling. It’s a far more honest portrait than May’s public image as a self-confident intellectual with his life figured out. Readers gain access to May’s inner struggles through his uncensored journals, which May gave the author three decades ago and from which he draws deeply to achieve extreme intimacy with his subject. But May lived in the world as much as his journals, and Abzug provides an excellent introduction to May’s work that also serves as a useful overview of the tenets and major figures of 20th-century psychology. May’s intellectual life was robust, and he interacted with Alfred Adler, Reinhold Niebuhr, and Paul Tillich before reaching his own prominence. Later in his career, he became a leading figure in existential psychology, joining Carl Rogers and Abraham Maslow at the forefront of the humanistic “third wave” of psychological study. If it sounds like May was everywhere at once, he was, authoring journal articles and books, giving public lectures, attending conferences, teaching, and, of course, treating patients. Refreshingly, Abzug doesn’t dwell only on May’s career. In addition, he offers portraits of youth, family, marriages, affairs, rivalries, illnesses, and deaths—all the rich stuff of life as it concerns a man who was committed to understanding and experiencing the fullest possible range of human possibility.