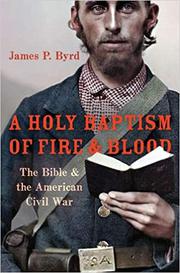 Byrd, a professor of American religious history at Vanderbilt Divinity School, provides a useful, original contribution to the vast library of Civil War history, focusing not merely on faith or religion in the context of the war, but on the Bible itself. Given the depth of religious fervor and level of biblical literacy that marked American society during the war years, the author is able to tap into a deep well of cultural riches and historical insights. “The American Civil War was not primarily a war over the Bible,” writes Byrd in the epilogue, “but for many Americans it was a biblical war,” and he points out several times that Lincoln once noted how both the North and the South “read the same Bible.” Both sides did indeed read the same Scriptures, and while both believed the Scriptures supported their views, they offered wildly differing interpretations. Byrd also shows how the Bible was a central point of reference for nearly everyone in Civil War society, from enlisted men to officers, abolitionists to proponents of slavery, politicians to, of course, clergy. Old Testament references, many of which are obscure today, were used widely by both sides of the conflict to interpret the contemporary events and find the direction of God’s favor. The Bible was used to prove, understand, or explain everything, from White supremacy to the reasons for specific military defeats to the assassination of Lincoln. As the war carried on, the language of sacrifice found throughout the Bible saturated Americans’ understanding of the conflict. “We misunderstand the Bible’s role in the war…if we devalue the biblical images of sacrifice,” writes the author, whose eye-opening analysis shows how, through sacrifice and atonement, Americans from both sides found meaning in the carnage of war.