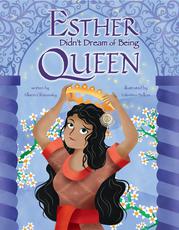 Esther is living a quiet life in the care of her cousin Mordecai when the king orders “all pretty young women” to report to the palace to be considered as a new queen. For three years she manages to avoid submitting to the edict. Eventually forced to comply, and with a warning from Mordecai to keep her religion a secret, she finds herself among a crowd of women vying to be the king’s choice. She remains true to herself, surreptitiously keeping Shabbat and wearing her old clothes. The king chooses her, perhaps in part for her strength of character, which she continues to display as queen. The king’s adviser, Haman, the villain of the story, intends to attack all the Jews, and it is Esther’s courageous plan that saves her people. Of course a celebration follows, still enjoyed today as Purim. Esther narrates her own tale, speaking directly to readers in a conversational tone, vividly describing her emotions and reactions as events unfold. Throughout her tale she alludes to similarities with “Cinderella,” but she emphasizes that her story “is not a fairy tale.” Belloni’s brightly hued, highly detailed animation-inflected illustrations creatively depict biblical-era Middle Eastern setting and dress. All characters are appropriately light-brown–skinned with dark hair.