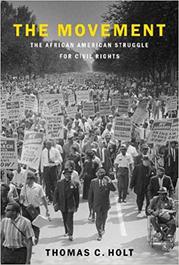 In this lucid account, Holt, professor of African American history at the University of Chicago, notes that “the challenges to the Jim Crow order between 1955 and 1965 were clearly rooted in the generations of resistance that came before, and they cannot be understood without that prior history.” Certainly it is not well known that in July 1917, 10,000 African Americans staged a silent parade in Manhattan to protest anti-Black violence or that, a decade before Rosa Parks’ protest in Alabama, a 66-year-old Virginia woman named Carrie Fitzgerald refused to move to the “so-called ‘cullid’ seats” of a long-haul bus. “The driver,” writes Holt, “decided to leave well enough alone, Virginia law and custom be damned,” thus adding a moment to a long series of acts of resistance that “made a broader rebellion possible ten years later.” The author makes several salient points, among them the fact that much of this antecedent protest was mounted by women and that international events such as World War I and the Great Depression were important in loosening the hold of the Jim Crow South on the U.S. government. One effect of the Depression was that dispossessed rural Whites came in number to places like Montgomery, Alabama, a city that had earlier been roughly equal in racial makeup, a migration that “ironically destabilized rather than confirmed the political grip of the city’s traditional white elite.” That did not make White resistance to civil rights any less intransigent, but neither was it monolithic: The first lunch-counter protests were staged in Nashville and led to the desegregation of many of the city’s downtown diners. Conversely, when Black children marched against racism in Birmingham, Alabama, in 1963, police chief “Bull” Connor had no qualms about turning firehoses and police dogs on them, which only strengthened the movement.