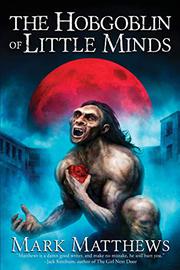 Twenty-four-year-old Kori Persephone Driscoe’s father, Peter, has been missing for years, so she and her mother decide to empty their house. Kori also visits the soon-to-be-demolished Northville Psychiatric Hospital to look for her dad, as she’s done many times before. There, she finds disturbing graffiti in a tunnel and dwells on her father’s troubled past. A security guard discovers and chases her—but then an apparent rock golem appears and murders her pursuer. She finds that the creature is actually her father, but he seems disturbed, and committed to feeding genetically altered patients called Vrykolakas. Flashbacks relate Peter’s past involving the devious Dr. Zita and a patient named Maya with a troubled tale of her own. The Vrykolakas attack Kori, and later, she wanders in the woods outside the hospital; before long, she learns about a rogue doctor’s bizarre project. Matthews’ worldbuilding over the course of this novel has a contagious verve, as well as psychological complexity. Sometimes, though, it veers into undefined psychiatric jargon; for instance, unwary readers may not know that to “decompensate” means to lose the ability to maintain one’s mental health. There’s also some awkward phrasing (“Her arms wanted to embrace him, but her hands disagreed”) and moments of purple prose, such as a description of moon’s “endogenous rhythms of circalunar periodicity.” Nonetheless, this well-researched novel is likely to grab horror fiction readers’ attention like a sudden howl at the moon.