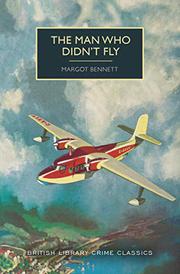 After publishing seven variously successful crime novels, Bennett (1912-1980) shifted to writing for television. It would be hard to top the premise of her sixth novel for sheer ingenuity. Businessman Joseph Ferguson, unable to book a commercial flight, charters a plane that goes down in the Irish Sea. The pilot is dead, and so are three of his four planned passengers: Ferguson, shady broker Maurice Reid, unemployed hypochondriac Morgan Price, and childlike poet Harry Walters. Which of the men failed to board the flight? Why? Did he arrange the crash? Where is he now? The inquiries of Inspector Lewis and DS Young focus on Tower House, the home of Maurice’s friend Charles Wade, where all three of the others had put in an appearance in the days before most of them died. Wade has obviously been marked by Maurice as lamb to be shorn; his daughter Hester is charmed and beguiled by Harry, whom everyone else heartily dislikes, an antipathy shared by Ferguson’s wife (or maybe widow), Moira. A series of extended flashbacks to those last few days calmly skewers the pretensions of all the characters while allowing each of the four designated passengers to audition for the role of sole survivor. An acridly amusing 1945 short story, “No Bath for the Browns,” provides a brief addendum that’s worth every word.