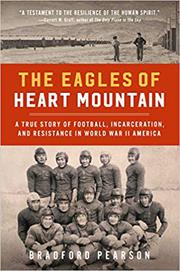 In his first book, journalist Pearson immediately rejects the bloodless language that calls the imprisonment of American citizens “internment” and “relocation.” It was incarceration—“an imperfect solution, implying that those imprisoned had committed crimes”—in places that should properly be called concentration camps. Those jailed were ordinary citizens, many of whose ancestors were recruited as agricultural labor and whose young were so thoroughly Americanized that they played league sports on multiracial teams. At the Bay Area’s Mountain View Union High School, writes the author, “in class pictures, Yoshinagas and Yamijis and Okamotos stood next to Gruenebaums and Popoviches and Mendozas.” Some players, such as Babe Nomura of star-studded Hollywood High School, would surely have gone on to college scholarships and even professional careers had they not been swept up, following Franklin Roosevelt’s Executive Order 9066, in the mass imprisonment of Japanese Americans in such inhospitable places as Wyoming’s Heart Mountain. Japanese athletes regrouped there, playing sports among themselves and then, thanks to some surprisingly sympathetic locals, against other schools on the statewide athletic circuit. Admittedly irregular—some of the players were well beyond school age, Pearson writes—the young men did their best at basketball, baseball, and football. When the military came calling, looking for recruits even among the imprisoned, many refused, going on to twofold imprisonment as draft resisters. Pearson’s narrative goes on a touch too long, but his play-by-plays read compellingly like contemporary radio scripts: “As the third quarter kicked off, Kaza Marumoto found a pinch of that luck, landing on top of a Bulldog fumble on the Eagle 36. Mas Yoshiyama dropped Don Ash for an 11-yard gain, Bill ran for a short gain of 3, and Mas galloped for another 9.” But sports take second place to social justice, and this book serves that cause well.