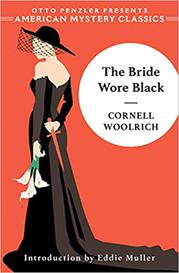 Woolrich (1903-1968) kicked off his Black series with this dark 1940 fantasy about a woman who targets five men for death for reasons that would be teasingly obscure if it weren’t for the title. Following the rule that “the really clever woman is all things to all men. Like the chameleon, she takes her coloring from his ideal of her,” Julie Killeen studies each of her targets at her leisure, discovers what they’re looking for in a woman, and then assumes that role. She crosses the path of man-about-town Ken Bliss just long enough to kill him. For the marginal recluse Mitchell, she poses as the partner in an impossible romance. Luring his wife away from home, she turns up on Frank Moran’s doorstep as his son’s solicitous kindergarten teacher. After posing as an irresistible model for the painter Ferguson, she sets her eye on her final target, the popular writer Holmes. Detective Lew Wanger has his suspicions about the murders even though the women who committed them seem to have little in common. Will he catch up with Julie before she finishes her work? After ratcheting up the tension bit by unnerving bit, Woolrich ends his tale with an ironic postmortem that casts Julie’s labors in an even darker light. The pattern behind her crimes is so stark, simple, and compelling that Woolrich couldn’t resist reprising it in Rendezvous in Black (1948), which readers may want to seek out if they’re still able to sleep after gulping this nightmare down.