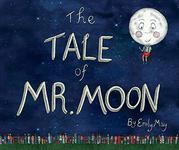 “He is up so late when we’re all asleep, / so he has no one, not even a sheep.” A young girl named Katy with a pale complexion and brown hair reaches out to Mr. Moon, who is “feeling blue,” but unfortunately, Mr. Moon is too far away to hear. He leans forward on his chair in the sky but soon leans too far, falls off his chair, and tumbles down to Earth “with a THUMP.” Katy and the townsfolk quickly come together to patch Mr. Moon up and create a ladder tall enough to return him to the sky. When it is time for him to leave his friends, of course Mr. Moon is sad…until Katy whispers a secret: He can use the ladder to visit his friends whenever he wants. So, if one night readers look up into the sky and don’t see Mr. Moon, now they will know he’s gone to visit friends. Mr. Moon is depicted as a man with a huge, cream-colored head often contrasted against a dark night sky. The townsfolk seem like little worry dolls by comparison and are shown with a range of skin tones. This fanciful introduction to the phases of the moon, imported from New Zealand, has the intimate feel of folklore. Those preparing to read it aloud should practice to smoothe out the meter in a few places and locate Katy in the town scenes.