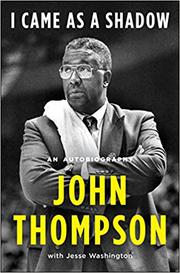 Coach Thompson, writes co-author and ESPN correspondent Washington, is a masterful student of “the game behind the game,” both the intellectual challenges of the court and the psychological factors that influence and sometimes impede players. Basketball, Thompson adds, “became a vehicle for me to challenge injustices.” Arriving at Georgetown in 1972, when Black coaches were few, he demanded that his players be students first, telling recruits that he expected them to spend more time in the library than in the gym. “You can kill people by saying that society is equal,” he writes, “then starting a hundred-yard race with most white people at the fifty-yard line.” Some of his more storied players, such as Patrick Ewing and Alonzo Mourning, overcame institutional and social barriers to become stars, but most athletes even at the college level are playing against the odds, with few standing a chance of going pro. (One standout episode in the book finds Thompson extracting Mourning from a clutch of drug dealers.) Sometimes the NCAA and other conferences put barriers in the way, as when the Southeastern Conference pushed through a proposition that forbade scholarships to students with GPAs lower than 2.0. Because opportunity for students is unequal, that meant that Black students would suffer—one reason, Thompson notes, for a change in the basic assumptions of student athletics: “Since the NCAA won’t hold everyone accountable, paying players might as well be legal.” Another pointed episode comes when Thompson, since retired, looks at the history of Georgetown, a Jesuit school whose founders were significant players in the slave trade, a fact the school has dealt with by offering reparations to the descendants of people enslaved at their hands.