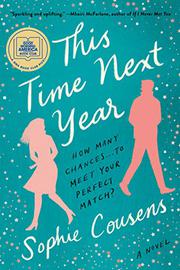 “Look, Shaylene, I’m sure you’ve seen Sleepless in Seattle? You know that bit where Meg Ryan is supposed to meet Tom Hanks at the top of the Empire State Building on Valentine’s Day? Well I’m in a situation a bit like that,” pleads the likable but self-defeating pie entrepreneur Minnie Cooper during the climax of Cousens’ debut. Yes, she certainly is, having struggled for more than 300 pages through every rom-com trope in the book. Her story begins on New Years’ Eve 1989, when her mother, Connie, goes through labor with a waifish but well-heeled wardmate named Tara Hamilton. One of them will win a cash prize for giving birth to the first baby of 1990, and wouldn’t you know, it’s the rich lady who doesn’t need the money. Not only that, she steals the lucky name Connie has chosen for her child: Quinn. Furious, the Coopers decide instead on Minnie, not realizing that this will subject their daughter to a lifetime of self-esteem–crushing car jokes. On the other hand, Minnie needs her self-esteem crushed so that when she runs into the rich, handsome, mensch-y Quinn Hamilton on their shared birthday 30 years later she can spend a year spontaneously generating one mistaken impression after another so the two don’t just accept what fate so clearly intends for them. While Quinn and Minnie don’t stray far from type, they are surrounded by an entertaining supporting cast—Minnie’s irritating punster boyfriend; her amateur horologist dad; her employees at the not-for-profit pie bakery, particularly a platinum blond wastrel named Fleur. Mother Connie is a bit of a problem, though. Seething with resentment about the stolen name and other injustices, she’s a cold and negative mother who passes the chip on her shoulder to her daughter—until something happens offstage and she turns into a completely different person. Not sure what movie this comes from, but it doesn’t work.