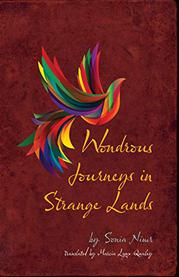 The Village, as locals call it, “was so isolated that no one knew of its existence, except for a few of the merchants who traded with the villagers.” It is also a place where books are forbidden to girls for fear that reading will turn their heads from the truth, and adult women who dare express independence are sent to the “House of Shamed Wives.” Young Saeed will have none of it, and after he escapes to the city, becoming a bookseller and falling in love with the beautiful Jawaher, he returns to help lift a curse and liberate the Village, though at terrible cost. Shams and Qamar, Saeed and Jawaher’s daughters, take separate paths when they are orphaned: Shams lives quietly while Qamar, armed with a book Saeed had treasured—one that gives Nimr’s tale its title—embarks upon truly wondrous journeys indeed, most involving love and loss. In the first, Qamar leaves Gaza for Egypt in a caravan in which, night after night, she takes the role of a Scheherazade-like storyteller: “I told them a story I’d read in a book,” she recounts, “about a sailor lost in the Sea of Darkness, who remained there for many years, fighting the waves, horrors, and monsters of the sea, until finally he triumphed and returned to his family.” Brigands beset the caravan, and though they edit her heavily to be sure that the bad guys in any given story win the day, her talents win her an elevated place in a palace—and then, in turn, aboard a pirate ship and in royal households from Morocco to India. Nimr’s story is both fabulous and utterly matter-of-fact, and, notably, at every turn women are the leaders and the shapers of their worlds. The writing is lovely, too, as when Qamar tells us, “On the watery surface, I could see my life clearly written, each stroke of the oars another page of my life.”