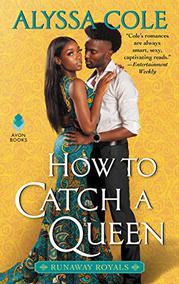 As heir to the throne of Njaza, Sanyu could never feel joy at the prospect of being king, only terrible pressure, anxiety, and responsibility. Sanyu wants to be a good king, but Musoke, his father’s most powerful adviser, insists on valorizing Njaza’s glorious past and ignoring its current problems. As the old king lies on his deathbed, Musoke coerces Sanyu to honor his father’s wishes by marrying Shanti Mohapti, a woman from the neighboring country of Thesolo (the setting of Cole’s Reluctant Royals trilogy), a more forward-thinking and modern kingdom, who was the best candidate they could find at the last minute. Sanyu’s father had more than 30 wives, with each marriage lasting around four months; only if a king finds “the True Queen” will a royal marriage endure. Shanti, who was born to a family of goatherders, has wanted to be a queen her entire life, and she studied and learned about modern monarchies with unwavering devotion. Her goal is not wealth and fame but rather the ability to help her people and change the world for the better. Once the old king dies, Sanyu is overwhelmed by grief for his father and anxiety about his new role; Shanti’s eager readiness to be queen helps him understand that ruling a kingdom doesn’t have to be a burden. Sanyu must learn to wield his power as king while Shanti must reconcile her personal desires with the constraints of her new society. Since the novel focuses on each of their personal journeys as they ascend to the monarchy, their romance seems almost perfunctory.