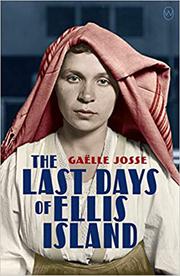 Already the winner of the European Union Prize for Literature after its publication in France, Josse’s slim novel contains the somber reflections, in diary form, of one man’s 45 years of service as a gatekeeper at what once was the door into the United States for millions of immigrants. John Mitchell, who began working for the Federal Immigration Service at Ellis Island as an immigration inspector and eventually rises to the position of commissioner, finds himself the only remaining employee at the deserted complex, but the ghosts of its many temporary inhabitants and his former colleagues remain intensely real. Nine days before its closure on Nov. 12, 1954, he sits down to record his memories—mostly painful and deeply regretful—of his long tenure. In spare, but at times poetic, prose, Mitchell describes his brief, almost impossibly happy marriage to his late wife, Liz, a nurse who also worked on the island. Mitchell is a man of orderly habits and obvious rectitude, but he’s haunted as he recalls the stories of several immigrants, all of them cases in which he’s guilty of serious, but totally human, lapses in judgment. The most troubling involves Nella, a beautiful young woman from Sardinia, who arrives with her younger brother, Paolo. After Paolo is marked for exclusion because of a mental deficiency, Mitchell allows his emotions to overcome his professional obligations in his relationship with Nella. When he permits, against his better judgment, another Italian immigrant with an anarchist past into the country, Mitchell overcompensates during the Red Scare of the 1920s by excluding a couple from Hungary with vaguely communist leanings. In the tale of this fictional bureaucrat, Josse powerfully evokes the spirit of the “huddled masses” who landed on America’s shores while creating a memorable portrait of a man torn between his commitment to his difficult job and the longings of his heart.