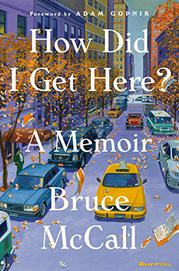 Born in Simcoe, Ontario, in 1935, McCall grew up with five siblings. In this nostalgic account of a creative life, the author begins with vignettes about his childhood and his early enchantment with artists like Norman Rockwell, who was “sui generis, so confoundingly skilled that no artist ever tried to copy him.” A move to postwar Toronto was less picturesque due to an alcoholic mother and absent father, a situation he indelibly describes as a “Grand Guignol of lovelessness and casual cruelty.” With potent affection and deadpan candor, McCall chronicles the struggles of his younger self, and his bemusement at ideas he’d once thought were ingenious is charming. Though some passages about family rake over repetitive wounds, the author effectively frames them as spurs toward independence, and the narrative is rich with metaphor and allusion. About retreating into a satirical, autodidactic world as a refuge, he writes, “I could use this creative energy as a bathysphere to explore the deep mysteries of my life hidden below the surface. My vessel bore no relationship to the Good Ship Lollipop….I crept up on truths, spun my wheels, invented detours that led to more detours.” From an ill-fitting apprenticeship in commercial art at an advertising agency to his parents’ deaths (both at the age of 49), McCall unfurls his memories with a raconteur’s colorful flourishes. His accounts of writing failures, including an attempt at producing a car magazine, meander with enthusiastic detail, and he brings to life the Mad Men–era advertising world via sections on his move to Detroit to write copy for Chevrolet and, later, to New York, where he wrote for Mercedes-Benz. Midcentury automotive buffs will find this history fascinating while others may skim. Only in the final chapter does McCall discuss his work as a cover artist, an affirming feat after years of pushing art to the side. The book includes the author’s photos and drawings.