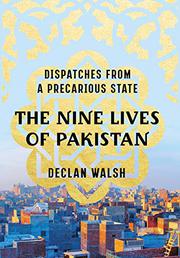 From 2004 to 2013, the author lived in Pakistan as a journalist for the Guardian and then the New York Times, and he witnessed numerous tumultuous changes within the country, which has been ruled by the military for a large part of its history since the Partition from India in 1947. Relations between the countries soured, and Pakistan has been mired in corruption and violence for decades—a situation at odds with its name, which means “Land of the Pure.” Pakistan was in the global spotlight during Benazir Bhutto’s two terms as prime minister (1988-1990 and 1993-1996), but the nation’s “fairy tale” period devolved after lurid revelations of her family’s freewheeling corruption, and she was assassinated in 2007. After 9/11, Pakistan was excoriated by the Bush administration for harboring Taliban refugees and jihadi terrorists, in particular Osama bin Laden. In search of the country’s profound sense of contradiction (“the cruel, ugly and downright terrifying side of Pakistan”), Walsh diligently investigates the character of a variety of relevant individuals, including Pakistan’s founder, Muhammad Ali Jinnah, who, “fearing Hindu domination, sought to create a Muslim homeland”; a fundamentalist who directed a “Waco-style siege in the heart of sleepy Islamabad,” spouting jihadi slogans; Asma Jahangir, the “doyenne of Pakistan’s human rights movement” who met the ruling generals head-on; and businessman and liberal politician Salmaan Taseer, who was assassinated for supporting a persecuted Christian woman’s cause. Walsh also digs intriguingly into the mystery of the insurgencies that persistently plague the province of Balochistan. In 2018, an ex-spy finally revealed to the author why he was actually expelled. Some readers may wish for an epilogue or afterword that brings the story up to the present, but overall, this is a well-written, journalistically sound report.