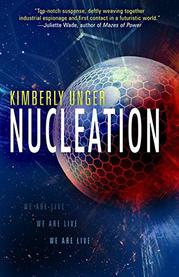 Helen Vectorovich and her navigator partner, Theodore Westlake, have worked successfully together for years on numerous remote deep space mining missions. But while attempting to open a jumpgate billions of miles away, Vectorovich—remote piloting a robot body—discovers that the project is in chaos, being disassembled by what appears to be an army of tiny nanomachines of unknown origin. She is pulled out before the machines take her robotic body apart, but she soon discovers Westlake was inexplicably killed by quantum feedback. With her only friend dead and her career in jeopardy, Vectorovich sets out to find answers—and becomes entangled in a grand-scale conspiracy involving industrial espionage and what could be first contact with a sentient alien race. The tech-powered premise—exploring and mining space by sending nanobots (“eenies”) through small wormholes that slowly build pre-programed structures out of interplanetary dust that are ultimately utilized by VR pilots—is a strong initial hook, and the mystery surrounding the strange nanomachines is well constructed. The pacing is lethargic, though, with long stretches of little or no action. And the biggest disappointment is with Vectorovich, whose potential as a memorable and endearing protagonist is squandered by a lack of internal and external description and backstory. Aside from her work relationships, readers know nothing about her, which makes for a cardboard character whom readers aren’t emotionally invested in and ultimately don’t care about.