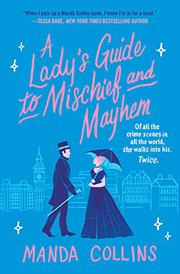 Lady Katherine Bascomb, newspaper owner since her late husband’s death, starts a new column called “A Lady’s Guide to Mischief and Mayhem.” There’s a killer on the loose, and Scotland Yard doesn’t seem to be doing their due diligence. Kate publishes the column to provide information to women, who are often left in the dark on these subjects, but it has the unintended side effect of getting Inspector Andrew Eversham kicked off the case. He blames Kate for ruining his career. Then, when Kate discovers a body, Eversham is sent to investigate. Despite misgivings about each other, they decide to work together to solve this case, which could be connected to the other killings. Their passion for justice leads to amorous passion, but their blossoming love is put at risk as the case becomes increasingly dangerous. While there are interesting aspects to both romance and mystery, neither feels fully developed. In the beginning, more attention is given to the mystery plot, so when the leads abruptly shift from enemies to lovers, it doesn’t feel quite believable—there hasn’t been enough building chemistry. The gradual revelation of clues to the mystery, including some exciting twists and turns, creates intrigue, but the eventual wrap-up, while neat, isn’t entirely satisfying.