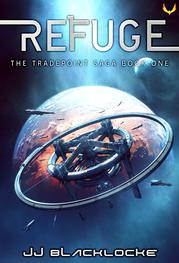 For the first time, Tradepoint, an intergalactic mercantile hub above the Prett home planet, is hosting a large number of Vennans, who have “Favored Trader” standing. Prett technological advancement depends on a steady supply of Vennan minerals while Vennan culture is more rooted in spirituality—most notably in each person’s “gyfte,” or psychic abilities, which include powers such as teleportation. The cultures’ differences become clearer over time through shifting narrative viewpoints, which move from protagonist Gredin te Balamont, a young woman who serves as the translator for Tetralanna, the head of the Vennan trading group, to Wyve, the head of Tradepoint, among others. Gredin, whom Tetralanna considers “erratic” and unskilled, has a vivid dream in which her lover, Dreff, says that their homeworld has been destroyed; he enjoins her to “Step into the fullness of your gyfte.” After a second dream, her life force strengthens and becomes “a candle, where it had always been a torch,” causing her to radiate energy as she sleeps. She must use her newfound power to be a leader for her people. The novel delves into the various aliens’ traits in detail, as when describing a Vennan’s fondness for “kithris,” a luxury spice coveted by everyone, “from the pleasure-loving Rodorno to the ascetic Hesch.” Sometimes the lavish attention to detail works against the novel’s pacing, which is quite slow. The first major plot turn, unrelated to the worldbuilding, occurs when Gredin dreams of her home planet’s destruction, eight chapters in. Later, Gredin accidentally injures a Hesch, and the ensuing trial takes up several chapters alone. Overall, though, the novel does an admirable job of presenting the archetypal story of an unlikely hero within a finely drawn fictional universe.