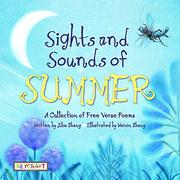 The disconnect between the book’s title and its more-specific subject is the first in a series of figurative and literal bugs. Each poem has a large, one-creature title, starting with “Spider.” All illustrations have pretty background flora in a pleasing spectrum of pastels. In general, the layout and text are kid-friendly in terms of limited vocabulary and spare presentation. However, both art and text veer into many confusing directions. Occasionally, a poetic device works—as with a dragonfly that’s compared to “a little helicopter.” More often, apparent attempts at whimsy fail—once due to a mismatch between text that bemoans a centipede’s unshod state and art that depicts its many feet in shoes—usually due to overreach into absurdity or non sequitur, possibly due to clumsy translation (which is uncredited). For example, glowworms glow because “While reaping wheat last night, / A patterned handkerchief was lost.” Both art and text become grotesque when a cartoon simian breaks the legs of a mosquito (incorrectly gendered male). The mood is equally sinister when a moth begins to drown and cries to Auntie for help. (No help arrives.) The final—and longest—piece is a morality tale about a butterfly’s hauteur, which is best understood by readers who recall the first poem. Butterfly’s plight is not for the faint of heart. Carol Murray’s Cricket in the Thicket (2017) is better encouragement for larval-stage poet-entomologists. (This book was reviewed digitally with 9-by-22.8-inch double-page spreads viewed at 89.7% of actual size.)