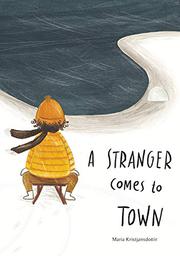 He looks down from a slope and notices a large white shape on the beach and discovers that it is a very large polar bear. Polar bears can be fearsome, but this one seems shy and lost. His village is no place for a polar bear, so kindhearted, pragmatic Henry decides to help it find its way home. First a disguise is needed, in the form of a large red sweater and cap swiped from a clothesline. Several stops to assuage the bear’s hunger empty the food shops and leave the bear even larger than before. With Grandpa’s help and quite a lot of ingenuity, while still maintaining secrecy from the clueless villagers, they are able to get to the harbor, where they must use two boats in tandem to get their huge traveler safely home. The author/illustrator tells the spare tale in a matter-of-fact manner employing simple, brief sentences placed in a world of white, befitting the Arctic setting. The bright cartoon illustrations, appearing in small vignettes as well as single- and double-page spreads and on the endpapers, flesh out the story with imaginative, often hilarious details. Amid the fun is a gentle, subtle message about the very real plight of polar bears. Henry, Grandpa, and the villagers all present White.