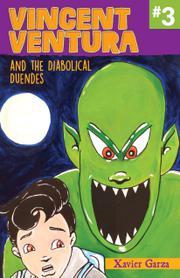 It’s around 3 a.m.—the witching hour—when Vincent wakes up to the sound of someone moving into the house at 666 Duende St. Very odd. Stranger yet, Vincent notices that one of his new neighbors, a boy roughly Vincent’s age, speaks to himself before committing a random act of vandalism. As the boy, who Vincent learns is named Sayer Cantú, flees on his bike, Vincent notices a little green creature on his shoulder. It looks like there’s a new monster mystery afoot! Recruiting his reluctant twin cousins, Bobby and Michelle, Vincent slowly befriends Sayer, whose reputation as a “bad boy” at school and home seems to be caused by the creature’s influence. At the library, Vincent and his cousins learn the name of the monster that’s causing Sayer’s misery: the duende. But what does the duende want? To turn Sayer into a duende! Book 3 in Garza’s Monster Fighter Mystery series adds a little psychological horror to Vincent’s newest adventure, and this installment emerges as the tightest entry in the series yet as a result. Vincent shares the spotlight with his cousins a tad more, leading to a cohesive story centered on friendship and, more importantly, kicking monster butt. Odd turns of phrase still pepper the author’s text, but his enthusiasm for the characters and monster’s folklore origins (revealed with a shoutout to fellow author David Bowles) remains palpable as ever in this dual-language novel with a mostly Latinx cast.