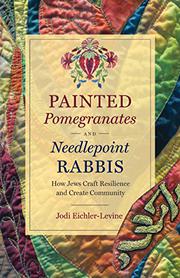 In this latest entry in the publisher’s Where Religion Lives series, Eichler-Levine, a professor of Jewish civilization, sets out to provide a book that “examines Jewish material culture with a focus on creativity, gender, and religion in North America. It is a book about the power of craft in relation to Jewish identity.” Unfortunately, readers looking for insight into Jewish arts and crafts will be unsatisfied by this sterile text. Instead of a meaningful exploration of the rich history of craft in Judaism, the author instead uses this heritage as a means to explore modern American Jews as an ethnic group. Eichler-Levine begins by pointing toward the concept of generative resilience, whereby “acts of creation become a crucial part of their makers’ ways of being and coping in the world.” This becomes the starting point from which the author views Jewish craft—as a reactionary expression or a coping mechanism. Eichler-Levine goes on to characterize Jewish craft as having an almost entirely activist role, devoting much attention to such “craftivist” subjects as the “Pussyhats,” which were ubiquitous during the 2017 Women’s March. When exploring Jewish crafts from a less political point of view, the author delves into an esoteric study of crafting that will appeal only to die-hard arts-and-crafts enthusiasts. “I want to think with the frame of what is Jewish expansively,” she writes about a knitting group, “as a critical construction, not just a function of Jewish-affiliated bodies.” In the author’s very act of dissecting and scrutinizing the art of Jewish crafting, she unnecessarily divorces it from the culture and the people who make it. By the end of the book, Jewish craft becomes a byproduct of politics, psychology, and ethnology, in the process losing its individuality and humanity.