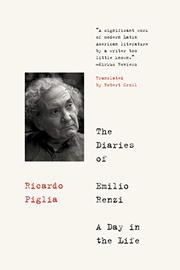 That Renzi’s diaries are à clef is certain. Whether they’re roman à clef or reportage is a question that only Piglia, who died in 2017, could answer. In whatever case, Renzi enters this third volume with presentiments of a vaguely defined illness that, over the course of the narrative, resolves into the neuromuscular disorder that ended Piglia’s life: “I can no longer dress myself, so I’ve had to get a cape or rather tunic tailored for me; it covers my body comfortably, with two cords to fasten it,” Renzi records at the end. “I have two outfits; while one is being washed, I wear the other, they’re made from blue linen, I need nothing more.” What’s worse is a steadily diminishing ability to use his writing hand, and being a writer—no, simply one who writes—is all he ever wanted.  The illness occasions his reminiscences of a long life of letters; whereas before Renzi had filled box after box with handwritten journals that went into every corner, now he has cause to revisit “the catastrophic stupidity of the way he lived.” Well, not so stupid: Renzi is a careful observer of the small details around him, such as the disappearance of the white poles at bus stops, in the time of the military dictatorship, with signs that turned the whole city of Buenos Aires into “detainment areas” that Renzi fears are the vestibules of concentration camps to follow. What is one to do but reread Don Quixote, pretend that things are normal, and take note of things afar, such as the attempt on Ronald Reagan’s life and the Janet Cooke affair? There are happy moments, too: seeing the great Gato Barbieri play his saxophone, going to see a Werner Herzog film. Alas, though, happiness must give way to Renzi’s grim conclusion: “Genius is disability.”