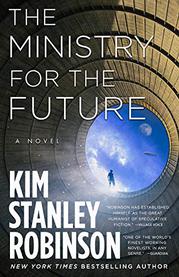 As Uttar Pradesh suffers from a crippling heatwave and blackouts, Frank May, an American aid worker in a small city, runs out of options to help the local residents stay cool and suggests that they go into the lake, which unfortunately offers very little relief. He rouses from an uneasy night submerged in the water to discover that everyone is dead but him, a devastating outcome that leaves him with PTSD and a desire to do something, anything, to reverse climate change. But as Frank is the quintessence of the ineffectual White American savior—not equipped to save anything or anyone, even himself—he doesn’t have the first idea about how to pursue his goal. His bumbling and his anger drive him to a failed kidnap attempt on Mary Murphy, head of the titular Ministry for the Future, a U.N. agency formed in 2025 to further the aims of the Paris Agreement. Frank drifts through years as a fugitive and then as a convicted felon, Mary works tirelessly through diplomatic and bureaucratic channels to save the planet before it’s too late, and the Children of Kali, a group of eco-terrorists also inspired by the Indian heatwave tragedy, pursue more violent—and shockingly effective—methods of combating environmental destruction. These strands initially form the basis of a gripping story, but they’re diffused by Robinson’s determination to narrate a history of an alternate future timeline, one which naturally excludes our present pandemic and the latest crackdowns in Hong Kong but also apparently ignores the U.S. dropping out of the Paris Agreement and the implications of Brexit. That tale, or more often lecture, is conveyed through dry and snarky infodump essays and brief, punchy accounts from people, inanimate objects, and metaphorical forces. Perhaps the author is angry that though he’s spent years writing novels exploring the dire results of climate change, the message doesn’t seem to have gotten through; it’s clear that he is unhappy at how politics and greed have obstructed opportunities for positive environmental action. At the same time, he seems hopeful that the world can still forge a path forward, if only we have the resolve.