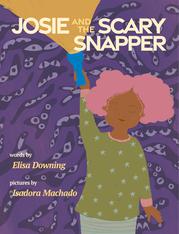 Josie is afraid of the monsters she sees in the dark. Her dad gives her a “Scary Snapper” (a flashlight) and tells her when she shines it on the creatures, they “will turn into something not scary.” One night, Josie nervously walks to the kitchen for water. She is relieved when the “monsters” she sees are in reality everyday items when she uses the Snapper. For example, a “monster with a funny shaped head” is just clothing on hooks. In the kitchen, she points the Snapper at a big monster. But it doesn’t turn out to be a familiar item. The illustration depicts a fuzzy purple creature cowering in fear. When he turns on his flashlight, aims it at Josie, and says, “It’s a…MONSTER!” she is shocked. The book concludes: “Josie was no longer afraid…with the Scary Snapper…she was the scariest thing in her house.” The concept of spooky shapes actually being ordinary objects is relatable. Although Downing’s twist ending may not assuage frightened readers, it deftly illuminates the notion that fear and intimidation are universal feelings experienced by even those figures readers are afraid of. Machado’s illustrations are artistic and nicely done. Josie has brown skin and pink hair. Key words are often emphasized typographically, some spanning entire pages. The images include up-close portrayals, like a glowing flashlight. The monsters are shown as both Josie’s imagined versions and their real forms.