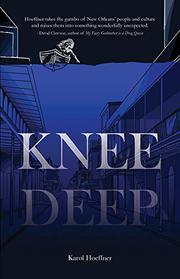 New Orleanian Camille Darveau has known Antwone Despre all her life but decided she loved him two years ago. In their part of the South, some people may disapprove of their potential coupling—she’s white and he’s African American. But she bravely makes her first move by inviting Antwone to her sixteenth birthday party, although he has a girlfriend, Emily (who pompously dubs herself “M—,” pronounced “Em”). Unfortunately, as it’s 2005, Hurricane Katrina soon hits and wreaks devastation. Camille learns that Antwone is among the dead. He does, however, return as a spirit by periodically entering the body of Camille’s friend, Beano Benoit, a gay high school quarterback. Only Camille sees Antwone; others think Beano is trying to connect with M— and possibly cheating on his new love interest, Lewis Sinclair. This doesn’t stop Camille from trying to summon Antwone, as she feels their love is mutual. But while trouble is stirring, with Beano aware of what’s occasionally happening to him and Camille at variance with M—, Camille grudgingly acknowledges the best option may be to let Antwone go. Novelist and TV screenwriter Hoeffner weaves an absorbing, sorrowful tale from this material. Katrina isn’t merely a plot device but a real-life tragedy that touches characters throughout, and Camille has multiple run-ins with a dangerous man taking advantage of survivors of the hurricane. There are few shared scenes with Antwone and Camille prior to his death. But it’s clear as the narrative progresses that Camille’s love and longing are genuine, and potentially having to say goodbye is heartbreaking for her. Hoeffner suitably details the French Quarter and, eventually, Mardi Gras, while subtly incorporating instances of racism and a family that discourages interracial relationships. It’s a sometimes-bleak story, though the author doesn’t let it slip into overwhelming gloom.