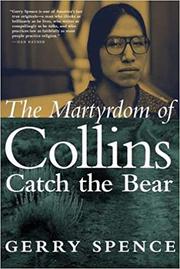 “As a prosecutor,” said Spence’s opposite in a trial four decades ago, “you do the best you can with the witnesses you’ve got.” That trial concerned a murder charge against a young Lakota man named Collins Catch the Bear, who had been raised with every disadvantage: alcoholic parents, foster families, juvenile detention, low self-esteem, and a quickness to cry tears of rage and act out, a tendency that sent him to a mental hospital, where “a psychiatrist…concluded that he suffered from a ‘behavior disorder of childhood with unsocialized aggressive reaction, moderate to severe.’ ” Adds Spence, “in short, this fourteen-year-old boy was pissed to the max.” The boy was a Lakota who did not speak the language or know much of his people’s history; when he came into the orbit of Russell Means and the revived American Indian Movement of the early 1980s, he was eager to join. Collins was soon swept up in trouble, accused of killing a white man who had threatened him and several other Sioux. The facts didn’t add up. As Spence writes of the victim, “his right hand was completely covered with blood, but not a drop of blood was on the pistol. Someone had put the pistol in the man’s hand after he was dead.” Furthermore, the key witness for the prosecution was “a professional liar,” but the case went on. Collins was convicted and sentenced, though a sympathetic judge lightened his sentence, an act of kindness that did no good. The young man was soon in and out of jail for other offenses and came to a bad end, in Spence’s view “a modern-day martyr” whom life had dealt nothing but bad hands.