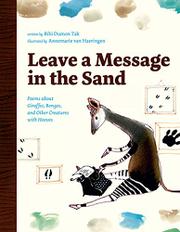 The lesser mouse-deer, for example, is “Only 12 inches tall, / 18 inches long, / and 4.5 pounds in weight.” And the Arabian oryx “was the first (nearly) extinct animal / to be returned to the wild.” Each entry is accompanied by an illustration of the animal in question, in renderings that vary from cartoony depictions to splashy watercolors, often with a hint of the surreal. While each poem contains at least a nugget of interesting information, and many use humor (scatological or otherwise), several may find a less appreciative audience in the United States than they did in the Netherlands. The poem about the wild Bactrian camel, for example, references a harem and uses the slur “lame”; the hippopotamus entry relies in part on fatphobia for effect; and the Japanese serow’s poem opens by just throwing out a variety of Japanese words including Toyota and Sudoku. As it’s a translation, it’s hard to say exactly where these choices originate. The collection does neatly balance humor with scientific information, but poetry lovers may be daunted by the scantily leaded small type, and children who want to learn about animals are more likely to seek books with more robust nonfiction elements (though they may appreciate the factual backmatter).