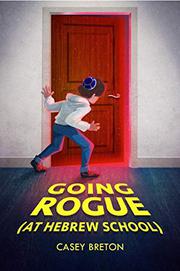 Ten-year-old Avery, who narrates his story, has three passions in life: Star Wars, science, and football. Unfortunately, he must attend Hebrew school, which interferes with playing football. He hates studying Torah because what he reads doesn’t always align with scientific evidence. Then the times for football practice change and he can join a team—a participation achieved by winning over his concussion-fearful parents. Hebrew school takes on a different dimension when a new rabbi arrives who amazingly like Yoda talks. He also plays music from the movies and owns a red lightsaber. Rabbi Bob even seemingly equates the Shema prayer with the Force. But Avery still grapples with what it means to be Jewish. Then, injuries on the football field, one to a bully and one to a friend, lead to a discussion of a mitzvah called bikkur cholim, which refers to visiting those who are sick. Avery now considers the possibility that religion and science can coexist, as the rabbi explains that Judaism values the process of questioning more than the certainty of answers. Still, Avery questions his attendance at Hebrew school, an obligation his parents never fully explain or discuss with him. Readers may be drawn to the detailed football plays and the Star Wars references while those in Hebrew school may find a kindred spirit.