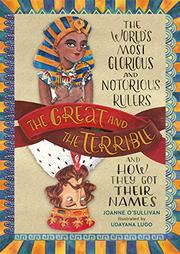 O’Sullivan chooses her 25 entries from a pre-20th-century but worldwide roster—including figures from Indian, Persian, and Mayan realms and from Hawaii, Madagascar, Korea, and Morocco as well as diverse European countries. Separating “Greats” from “Terribles” and mixing in eight women, she leads off with Pharaoh Hatshepsut and concludes with “Bloody Mary” Tudor and Sultan Ismail “the Bloodthirsty.” Along with tucking in side notes for each subject on broader legacies and on contemporary events elsewhere in the world, she appends lists offering two dozen more “Worthies” and “Notably Notorious” to check out. Her profiles, though brief, are invitingly informal (for Hatshepsut, “pyramids were already so last millennium”) and focus as much on positive or negative character traits as on deeds and misdeeds. She commends the tolerance of Cyrus the Great for other religions and cultures in his empire, for instance, and Süleyman the Magnificent for not “micromanaging” his appointees. She also repeatedly points out that even the best sometimes went wrong, and vice versa. On the other hand, writing that the suspension of church services by “Bad” King John was unpopular because it took away a “ ‘fun’ thing to do” is pretty superficial. Lugo supplies formally posed upper-body portraits of the smiling or scowling subjects.