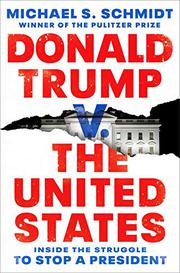 But her emails! As New York Times reporter Schmidt writes, in its investigation of Hillary Clinton’s use of a private server for official correspondence, the FBI found more than 100 instances of sensitive data but no reason to believe that the breaches were intentional. It’s a far more benign case than any that the author offers with Donald Trump in the lead role. FBI director James Comey, who brought up the Clinton emails right before the 2016 election, suspected ties between Trump’s campaign and Russian help, the leitmotif of Schmidt’s book, but his cautious probes were of little help to those bound up in the “epic struggle to restrain an unbound president.” Granted, Comey busted Michael Flynn early on: “He lied to the FBI, and lies suggest cover-ups. Now, the relationship between Trump, his associates, and the Russians appeared even more suspicious.” Trump asked Comey to let Flynn slide, a wish he wouldn’t get for three years, when William Barr did just that, proving that “the president had bent Washington to his will.” Schmidt’s account embraces the star-crossed Mueller Report, its lead author hobbled by orders from above that he not investigate Trump’s financial ties to Russia, even as Trump constantly threatened to fire him. Central to the story is Trump’s former counsel, Don McGahn, “one of the main reasons Mueller knew so much.” McGahn cooperated with investigators (and, reluctantly and briefly, with Schmidt) even though he was fearful that Trump would fire him, too, before he could finish his project of packing the courts with conservative judges. In this complicated, twisting narrative, the author notes that while the Mueller Report is seemingly moot, it provides prosecutors the wherewithal to charge Trump with crimes after he leaves office—one reason for Trump not to want to do so.