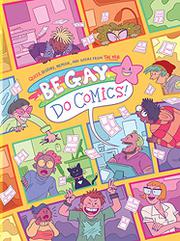 As the introduction declares, the accessibility of comics as a medium (both for readers and creators) allows marginalized stories to flourish. This claim manifests throughout the anthology as memoir, satire, and educational comics from 40 diverse creators fill its colorful pages. The contributors embody a variety of identities, from ethnic and national background to voices who are intersex, asexual, and otherwise representative of the spectrum of queer identities. The comics themselves vary wildly too, in illustration style, theme, and length. While one satirical comic denounces the capitalist co-opting of gay iconography, another presents a joke about a gender reveal party that ruptures the cosmos. Graphic memoirs recall personal instances of both struggle and joy. Some authors also expand upon important events and figures in queer history, from an account of the gay, Jewish Nazi-resistance fighter Gad Beck to the Lavender Scare targeting queer federal employees in the 1950s. These educational moments inform without ever being didactic or dry. The art ranges from the adorably cartoony style of “How Do You Translate Non-Binary?” by Breena Nuñez to the gritty crosshatches of “Sometimes I Call Myself Queer. Sometimes I Feel Like a Liar.” by Nero O’Reilly. Many entries stand out as truly great works of art, and the collection as a whole will entice readers to savor and explore it again and again.