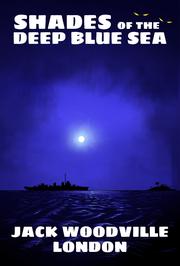 In 1944 Hawaii, Seaman 2nd Class Bart Sullivan is a coward who counterfeits orders to leave his troop ship, the Renegade, and return stateside. “No combat for me,” he brags to Chief Petty Officer Olafson. “I’ve got my orders.” Olafson is an illiterate (an illiterate CPO—really?) and a brute who clubs Sullivan to death during a training exercise. But, nothing if not resilient, Sullivan isn’t really dead—he sees a “white light” and becomes a shade, or a spirit, and winds up in sick bay, where eventually someone realizes, “This corpse ain’t dead!” The experience has worked out well for him, and now he’s no longer a coward, so he is “about to begin the do-over of his life.” But wait, there’s more! He’s become clairvoyant: As his battle convoy heads west, he foretells the typhoon it fails to avoid. Sullivan and Olafson go overboard. Part 2 contains rich visual detail as Olafson washes ashore on an Indonesian island abounding with dangers such as cannibals and a nasty Komodo dragon. A local woman saves his life but numbs him with toxin from pitohui feathers, intending to keep him for barter. When cannibals catch him, they show him a strange object Olafson knows is a crank-powered field radio. They hear singing from it and think the box contains the voice of a god—and Olafson is their connection. Using the “god box” he teaches them to sing “Don’t Fence Me In” and “White Christmas.” The story has a few minor annoyances such as occasionally hokey dialogue and overenthusiastic use of caps—mercifully, “RRRRRAAARRGHHHOOOOAAARRRRAAARRGHHHH!!!!!!!!!!!!!” appears only once. But it’s fun and often funny—one character thinks the Andrews Sisters are the god box’s best messengers.